SEC Chair Jay Clayton is Wrong: The Advisers Act Requires Much More Than Just Disclosure of a Conflict of Interest

ALL POSTS PRIOR TO 2021 HAVE NOT BEEN REVIEWED NOR APPROVED BY ANY FIRM OR INSTITUTION, AND REFLECT ONLY THE PERSONAL VIEWS OF THE AUTHOR.
It has been confirmed to me that SEC Chair Clayton and/or others at the SEC have been stating recently that:


WE MUST PUSH BACK ON THIS.

Realize that the SEC ignores its own precedent, and centuries of law, with these actions. SEC Chair Clayton seeks to redefine the English language. His actions will only weaken the law, foster distrust of financial advisers, and deter capital formation (as trust is essential to same, and high intermediation costs interfere with capital accumulation), which in turn will weaken the U.S. economy in the long term.

Also realize that Reg BI arose from a proposal by SIFMA and FSI (broker-dealer lobbying organizations), the SEC Chair Clayton (who represented broker-dealers in his law practice) has embraced. But it is a grave threat to the financial security of individual Americans, and does not impose any substantial restrictions on the conduct of brokers.”

You cannot easily disclaim your fiduciary obligations, nor seek client waiver of same.
Disclosures are completely ineffective in this area.
The SEC wants brokers and investment advisers to be virtually the same. They are not – they are, and should remain – opposites.
Fees and costs matter.
The fiduciary standard acts as a deterrent to, or restriction upon, greed.
Small clients CAN BE - and ARE NOW - being served under fee-based (and fiduciary) accounts.
In my view, SEC Chair Jay Clayton will go down in history as the worst SEC Chair ever. He is pushing the SEC to water down the fiduciary standard, redefine "best interests" as something other than the fiduciary duty of loyalty, and who advances the positions that so many broker-dealers desire - i.e., to be "trusted advisors" without being truly held accountable for the advice that they provide.

How should we react to this travesty?

A. VISIT OR WRITE YOUR MEMBER OF CONGRESS and YOUR SENATOR. Visit her/him when she/he returns to the district. Or fax a letter to the Member or Senator, or mail one. (Feel free to copy from this post.)

B. Submit a comment letter to the SEC. Yes, it is past time. But you can still indicate your outrage.

We have a chance of stopping the SEC, if you act now.

Just as importantly, your actions today will also set the stage for correcting the SEC's actions, when we get a new SEC Chair ... and Jay Clayton returns to being an attorney for Wall Street firms.

And your actions will demonstrate to Members of Congress and Senators how important this issue is. Not only to our profession. But to our neighbors and friends, and their future financial security. To the level of trust possessed by consumers in financial advisors.

For betrayal of trust (as will happen under the illusion of "best interests" that Reg BI fosters) will in turn lead investors to flee the capital markets, thereby deterring capital formation. This issue is important for the future growth of the U.S. economy.

ALL POSTS PRIOR TO 2021 HAVE NOT BEEN REVIEWED NOR APPROVED BY ANY FIRM OR INSTITUTION, AND REFLECT ONLY THE PERSONAL VIEWS OF THE AUTHOR.
[This post is inspired by an article in Bob Veres' Inside Information publication, a rich resource for all those who provide financial and investment advice. In his Feb. 2019 issue, Bob relates "core values" that were shared by Tracey Beckes, who recently spoke at the AICPA PFP Summit. Some of the following "core values" are derived directly from this publication; others were contributed by this author.]

What values will guide your life? What principles will you follow?

There are many ways to list out your values. Here's a recent list I composed, that conveys not just values but how they should be practiced. Some additional resources are listed, to aid those to begin to explore these practices.


THE 3 WAYS IN WHICH WE SHOULD PERCEIVE THE WORLD AROUND US:

THE 3 COMMITMENTS WE SHOULD MAKE TO OURSELVES AND TO OTHERS:

THE 3 PRACTICES WE SHOULD UNDERTAKE EACH DAY:

THE 3 CORE VALUES WE SHOULD EMBRACE AT ALL TIMES:

ALL POSTS PRIOR TO 2021 HAVE NOT BEEN REVIEWED NOR APPROVED BY ANY FIRM OR INSTITUTION, AND REFLECT ONLY THE PERSONAL VIEWS OF THE AUTHOR. 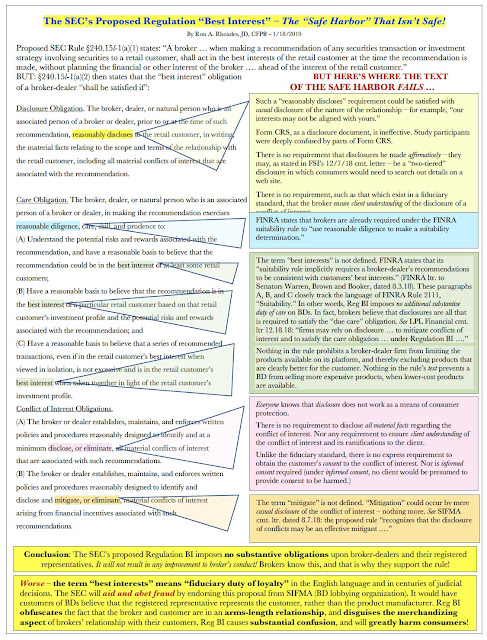 ALL POSTS PRIOR TO 2021 HAVE NOT BEEN REVIEWED NOR APPROVED BY ANY FIRM OR INSTITUTION, AND REFLECT ONLY THE PERSONAL VIEWS OF THE AUTHOR.
Part 8 (Last in a Series) on the Regulation of Financial and Investment Advice:
Examining the Fiduciary Duties of Investment Advisers Under State Common Law

In 2018 the SEC published a draft of its interpretation of the fiduciary duties of investment advisers. Yet, in that draft they omitted several requirements - particularly in reference to the fiduciary duty of loyalty and what is required when a conflict of interest exist. The SEC's draft could lead investment advisers to believe their conduct is "o.k." - when in fact litigation (and arbitration) occurs as a result of state common law fiduciary claims - and only very rarely under the Advisers Act itself (as, generally, there is no private right of action under the Advisers Act).

Herein I set forth - in detail (no surprise there!) - the fiduciary duties of investment advisers, as discerned from both the SEC's proposed rule, but as augmented with state common law understandings of the fiduciary standard of conduct. Remember - the SEC sets the floor - not the ceiling. Advisers should conform their conduct to the higher standard. (And, when ERISA applies, even higher standards may be required - which are not set forth hereunder.)

Not all securities lawyers will agree with the elicitation of fiduciary standards I set forth below. In part, in my view, this is because of a (wishful) misinterpretation of SEC vs. Capital Gains Research Bureau, which I have previously written about. And this is due in part to a lack of realization of the limited role of waiver and estoppel in fiduciary relationships of this type. Debates will continue, no doubt, with dual registrant firms and their attorneys arguing for a weaker interpretation of the fiduciary standard, while others (such as myself) see the fiduciary standard as one that should not be weakened nor subject to "particular exceptions" (as the late Justice Benjamin Cardozo would have put it.)

This elicitation remains a work-in-progress. Much additional legal research can be undertaken to locate and provide additional authority for the propositions taken herein.

Ron A. Rhoades, J.D., CFP® is an Asst. Professor of Finance at Western Kentucky University's Gordon Ford College of Business, where he serves as Director of its nationally recognized Personal Financial Planning program. This article represents his views, alone, and are not those of any institution, organization or firm with whom he may be associated. Follow Ron on Twitter: @280lmtd. To contact him, please email: Ron.Rhoades@wku.edu.
Posted by Ron A. Rhoades, JD, CFP® at Friday, January 11, 2019 No comments:

Ron A. Rhoades, JD, CFP® joined ARGI Investment Services, LLC, an affiliate of ARGI Financial Group, in March 2021, where he serves as a Financial Advisor. To contact Dr. Rhoades, please email: bear@argi.net. ALL POSTS PRIOR TO 2021 HAVE NOT BEEN REVIEWED NOR APPROVED BY ANY FIRM OR INSTITUTION, AND REFLECT ONLY THE PERSONAL VIEWS OF THE AUTHOR. Dr. Rhoades also serves as Director of the Financial Planning Program at Western Kentucky University (WKU), and as an associate professor of finance in WKU's Gordon Ford College of Business, where his students often call him "Dr. Bear." Posts prior to 2021 were undertaken by Ron Rhoades, personally, and have not been reviewed nor approved by ARGI Investment Services, LLC nor by WKU, any other firm or institution. All of Ron’s posts do not necessarily reflect the views of any firm, institution, organization, cult, or motley crew to which Ron currently belongs or has ever been kicked out of.

Ron A. Rhoades, JD, CFP® sailed across the Atlantic on a tall ship, performed in theme parks and road shows in Europe and America as a Disney character, rowed on a championship crew team, marched in the Macy’s Thanksgiving Day Parade, marched in competition with a state-champion rifle drill team, undertook a solo one-week trip into the Everglades, escorted numerous celebrities around Central Florida, performed as a “Tin Man” at a mountaintop theme park called “The Land of Oz” in Beech Mountain, NC, and served as a stage manager and talent scheduling coordinator for entertainment productions at Walt Disney World. And then he graduated college.

Since then, Ron Rhoades earned his Juris Doctor degree, with honors, from the University of Florida College of Law, which was preceded by a B.S.B.A. from Florida Southern College. Ron Rhoades has 35 years of experience as an attorney, with nearly all of those years substantially devoted to estate planning, tax planning, and retirement plan distribution planning. Ron also has over 20 years as a personal financial adviser. He was a principal with an investment advisory firm where he served as its Director of Research and Chair of its Investment Committee.

The author of numerous articles published in financial industry publications and several books, Dr. Rhoades has been quoted in numerous consumer and trade publications, and has been interviewed on Bloomberg's "Masters in Business" radio show segment. He writes occasional articles for industry publications. Ron is a frequent speaker at local FPA chapter meetings and national conferences in the financial planning and investment advisory professions.

He may be reached via e-mail at: Bear@ARGI.net.